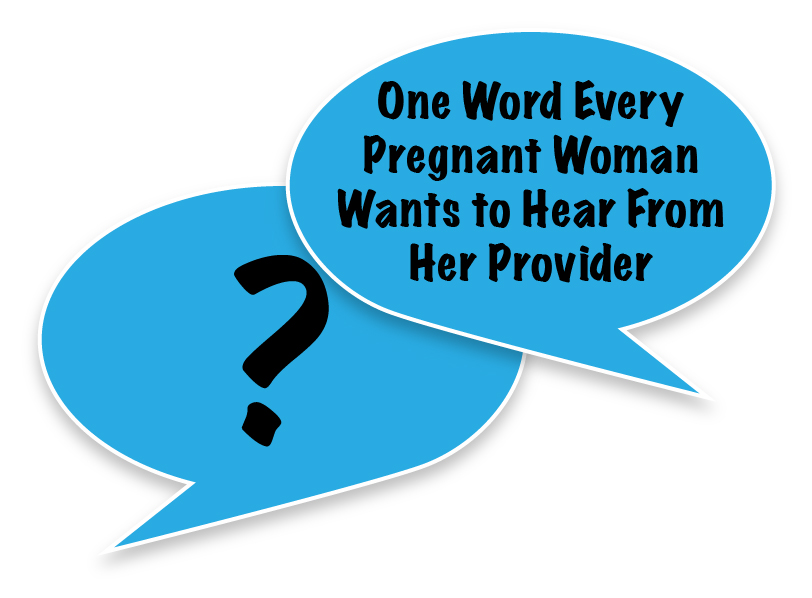 Of course, I’m going to make you read the entire blog post to find out what word I’m talking about…

I’ve always been a “think outside the box” kind of girl – alway challenging the social norms and asking the “why” question. It never made sense to me that after thousands and thousands of years of human history and survival that all of a sudden in the last 100 years, childbirth is “too dangerous” and “too painful” to do naturally. My mother had natural childbirth at the hospital in the 70s. So I figured if she could do it, I could it. Some women back then were still doing twilight sleep where they pretty much knock you out during labor and you wake up not pregnant anymore. Um…no thank you. Maybe I have control issues – like most women do. You know who you are 😉 Yet we relinquish control over our bodies to nurses we’ve never met, doctors we’ve talked to a total of one hour over the course of our nine-month pregnancy, and some random anesthesiologist on rotation at the hospital. Why do we do that? FEAR! Fear of death, fear of the baby getting stuck, fear of our bodies not working properly, fear that our uterus will explode, fear of the unknown. Why do we fear? Because doctors are trained to find problems, not help you with normal pregnancy and birth. So everything that could go wrong, they are going to tell you about, because they have to treat the highest-risk woman the same as the lowest-risk woman. And it doesn’t help that all your girlfriends are telling you their emergency c-section/forcep delivery/how-much-they-bled/how-the-baby-wasn’t-breathing/how-horrible-the-pain-was/how-many-stitches-they-had stories either. Ok, ok, you get the idea.

I had rarely heard a normal birth story until my early 20’s when a girl at my church gave birth at home (on purpose). GASP! I didn’t know you could that! Do you do it by yourself? Who helps you? What’s a doula? What’s a midwife? Isn’t it messy? What if something happens to you or the baby? WOW! A lot of people thought it was strange but I thought it was pretty cool! It didn’t apply to me because I wasn’t planning to have any children at that time. But oh, the possibilities! Since I’m a documentary nerd (my idea of a lazy Saturday is to binge-watch Netflix documentaries), I decided to watch “The Business of Being Born” just for fun. Like most women who have seen it, I was fascinated, educated, excited about birth, and empowered. I thought “Hey, I’m not the only one that feels like childbirth has been hijacked by 20th century medicine”. Stories about interventions out of control, epidural risks, and what Pitocin does to contractions was enough to convince me that home birth was a viable option. I’m not a stubborn person. I like cautionary tales.

Fast forward to 2012. I was struggling with blocked tubes (another story for another day), desperately wanted a family, and wanted to make sure that if I did happen to get pregnant, I was going to do everything to make sure my baby had the best possible start in life. Infertility didn’t mean I was broken in EVERY way. I just had a plumbing problem. Surely I still had the ability to grow and birth a baby without major fanfare and drama. Lucky for me, I had just moved from Georgia to Florida, which is a very midwifery-friendly state and Tampa Bay was a major hub of the natural childbirth movement. I was stunned to find out I was pregnant and was ready to find an obstetrician in the area. I assumed that because I was 35 and had a “condition” that there was some kind of risk factor involved so an initial visit with an obstetrician seemed like the logical first step. As I sat in the exam room, the OB walked in, told me what HE was going to, talked fast, and didn’t listen to me. Hmmm…ok. Second appointment, I met a kind CNM (certified nurse midwife) who listened, answered my questions, wasn’t in a hurry, and seemed very woman-centric in her communication and views. Great! “So will you deliver my baby?” “Well, we go in rotation, so it could be me or one of four other doctors/midwives.” I thought “Ok, but I don’t want that other guy in the room with me so I guess I’m not having my baby with you guys.” Then I asked her, “What do you think about home birth and are you allow to attend to one?” She was supportive of women who chose home birth but she wasn’t allowed to practice in that way. Ok, so the decision is beginning to be made for me. As I left the office and paid my co-pay, I was presented with a document and a sales pitch about how I could go ahead and give them $7,500 for a vaginal birth or $15,000 for a c-section birth. Terrible sales pitch! You’re trying to close the deal with me at 6 weeks pregnant. Unfortunately, I think the reason they do that is because many women will just sign the document with very little research or concern and psychologically lock themselves into the idea that they can’t change providers if they are not happy. I mean, how many times have you heard someone say, “My doctor is not going to allow this or that…” ALLOW? You’re paying him money to perform a service – he’s not your daddy. Go shop around for another provider. And by the way, just because you go to him once a year for birth control pills and a pap smear, doesn’t mean he is going to be a rock star at your birth. There is no loyalty involved. It’s a business decision. We spend a lot more time shopping for cars, than who is going to manage the care of our bodies and our brand new life during a very precious, scary, vulnerable time. We need to get it right. We need to be completely at peace about who we choose whether it’s a midwife, doctor, hospital, birth center, home birth, or a stream in the middle of the jungle (no joke, there’s a video on You Tube).

So after my visit with an obstetrician, I started researching local midwives with home birth practices. I found a lovely midwife named Nora. I got to meet with her for free for the initial consultation. Already I made a comparison – OBs don’t do a free initial consultation. They just jump right into the assumption that you are their patient. Patient? Am I a patient? I’m not sick, I’m pregnant. Once again, from a sales perspective, that would be like you showing up to the car dealership, me without a conservation bringing out a car you don’t necessarily want, and handing you the sales contract to sign. Nora would set aside a one-hour block of time for each appointment to just sit and listen to my concerns and address them. Midwives also like to refer to you as a “client” and not a “patient” which I thought was refreshing. Her favorite thing to say is “Everything is normal” “You are normal” “That’s normal” NORMAL! What a great word to hear when you are pregnant for the first time. People don’t usually describe me as normal (like I said, I’m an “out-of-the-box” thinker), but in this case, I wanted to be normal. That word reminded me that my “machine” wasn’t broken. It was well-oiled, well-maintained, and growing a big, healthy, baby boy. The word “normal” in and of itself put to rest a lot of fear about childbirth. Even as I yelled to the midwife as she frantically set up the birth tub, “My water broke and I’m bleeding” she yelled back “It’s normal!” Ok, good! I can resume pushing. I honestly don’t recall being afraid. I was at home by myself during most of my labor. It was only 5 hours from first mild contraction to birth. It was intense and exciting but not scary. And it wasn’t because I was some strong, Wonder-Woman character. It was because during my pregnancy I heard the word “normal” all the time. So it was easy to just trust God’s creation (me) to do what it needed to do. After an amazing water birth at home, my midwife spent the next 2 hours observing, doing the mama/baby check-ups, and making sure I was eating and breastfeeding properly. Then I received postpartum care at 2 days, 2 weeks, and 6 weeks later. She also answered my texts when I needed to be reassured that something was “normal”.

My second pregnancy was, of course, a no-brainer. I chose another wonderful midwife named Melissa. She and her staff were concerned about my physical, mental, and emotional needs and my second son came flying into this world in an hour-and-45-minute labor and birth. Everything was NORMAL. I’m sorry if my birth stories are boring. I prefer it this way. They are my favorite stories to hear from other mamas as well. I truly sympathize with women who desired to have the normal birth, but were unable to due to medical issues. I do appreciate our emergency doctors and nurses. I definitely would have wanted to benefit from their expertise and service if something had gone wrong. However, I do think money and greed has gotten in the way of evidence-based care and informed consent at the hospital. Homework, ladies! Those are your Google search terms for today.

This post was written by guest writer, Julie Ledbetter. She is the marketing consultant for In Due Season and an avid birth advocate.